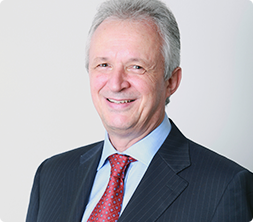 Jeremy has operated at Board level for over 10 years and possesses strong leadership capability having recently led a number of major transformational programmes in a safety critical industry. Jeremy recently stepped down as the Chief Operating Officer at National Grid with responsibility for its Gas Distribution Business and is currently Non exec director at Skills2learn a subsidiary company of Babcock International, Director and past Chairman of the Joint Radio Company and Director of the Energy Networks Association

Married and living in Hertfordshire, he joined the gas industry as a graduate engineering trainee and work experience includes Liquefied Natural Gas (LNG), Gas Transmission and Gas Distribution in a wide variety of roles. In 2002, Jeremy joined National Grid as Director of Network Strategy.

He worked overseas in 1986 when seconded to Tokyo Gas Company for 14 months, working predominantly in their LNG Production Division. Has also worked in the US where he led a project in to align the Asset Management approaches between the UK and the US. During this period of time, following the publishing of the Baker report, he led a global task force to implement a new Process Safety approach across the National Grid. This work has been recognised as Industry leading by the UK Health and Safety executive.

In 2012 appointed as Chief Operating Officer with responsibility for Gas Distribution in the UK and successfully led the organisation through a number of strategic changes in order to prepare the business for the start of the challenging regulatory period that started in 2013.

Jeremy has made a huge contribution to the energy industry as we know it today and his work has encompassed the technical, operational and commercial areas of the industry. Having played a crucial role in National Grid’s development strategy in the early 90s Jeremy has held prestigious appointments such as Chairman of the International Gas Union and President of IGEM in 2010/11. Is also in demand as a speaker at industry events and is regarded as a thought leader in the areas of Asset and Risk management and Process Safety.

In May 2014 Jeremy’s contribution to the industry and outstanding career was recognised with the IGEM/EUA Lifetime Achievement Award.